﻿Co-op Solutions is excited to invite you to attend the 2022 Presidents Cup, which benefits CU4Kids, and Children's Miracle Network Hospitals, and The National Credit Union Foundation.

To help build broader awareness and support for Credit Unions for Kids, Co-op is donating its sponsorship of the 2022 Presidents Cup by extending invitations to valued clients and partners to attend this exclusive event as a benefit for CU4Kids and Children's Miracle Network Hospitals as well as the National Credit Union Foundation.

The Presidents Cup is a series of men's golf matches between a team representing the United States and an International Team. The Presidents Cup is at its core, a chartable golf event in that there is no purse or prize money - players are not paid for their participation, but each competitor allocates an equal portion of the funds generated to charities of his choice. Since the event's inception, more than $54.4 million has been raised for charity from event proceeds, as well as contributions made on behalf of the Presidents Cup, including a charitable donation of $5.3 million from the 2019 event alone.

We at Co-op could think of no better way to celebrate our inaugural sponsorship of this event than to donate it in support of Children’s Miracle Network Hospitals and The National Credit Union Foundation to improve the wellbeing of as many children as possible.

This year's event will be at Quail Hollow Club, in Charlotte, NC. The event is a four-day, match play event with 30 total matches, comprised of a 12-person U.S. Team and 12-person International Team. Unlike the Ryder Cup, the Presidents Cup begins play on Thursday of tournament week. The team that earns the most points after four days of competition wins the Presidents Cup

Co-op is inviting our credit union industry partners, clients and friends to join us on the course between September 21-26. Tickets are on a first come, first served basis, and each registrant may reserve up to two tickets.

In the spirit of the charitable event, our recommended donation which will be divided equally between CU4Kids and The National Credit Union Foundation, is to match the cost, or a portion, of each ticket (between $100-500).

Each guest at this prestigious event will receive access to:

Any questions should be directed to Amanda Kramer at 909-204-1254 or by email at amanda.kramer@coop.org. 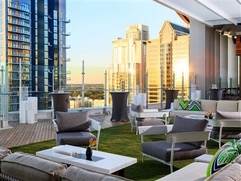 Welcome to the Kimpton Tryon Park Hotel, where we've taken a decidedly different approach to Southern traditions.  As gracious hosts in an evolving city, we invite you to take part in the culture of the New South in Uptown Charlotte, where the buzzing energy of a major city blends with hospitality.  Be sure to click on the hotel name to learn more about this exciting property.